The faces I once knew are scattered across existence. Stretching from the tangible present into the ethereal realms of what comes after, and what remains inside. Each one working their way into something better, something stronger, something more complete. A thousand sets of invisible footprints splaying out from where I stand, reaching out into rich dreams and luxuriant landscapes. Here I stand alone, and spinning, watching you ride on away, and you don’t even look back. Maybe I told you, and maybe I didn’t. Maybe I never spoke the words so you understood that I needed you here. But maybe you chose to stay away from this stagnant ground. Word upon word echoing around asking what comes next. Every path is rigged with disappointment, every blade in-between, with despair. I’m losing you all in the depth of the spaces between us. I’m crippled with fears that prevent me from running to meet you. Each step is like singeing my soles. For now I’m incarcerated in a prison of my own dread. No-one warns you about how scarred you can be, even once you are healed.

I like spiced rum.
I like mythical Beasts.
I like things thart are a bit weird.
So after a couple of glasses of black kraken rum with ginger ale, I thought I would check out the brand. You can Imagine my delight when I found out that you can get an umbrella with a kraken on the underside that has a rubbery tentacle handle! 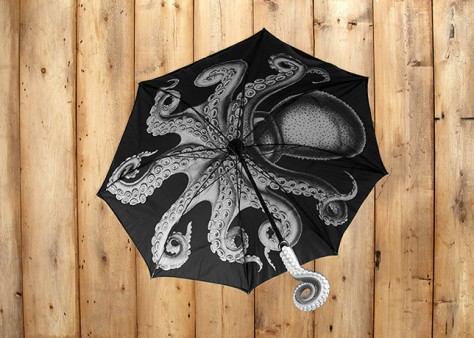 It’s the most adorable (inanimate) thing I’ve seen in months!
But. And this is a pretty significant but, the shipping to UK is $80 so I am now in mourning for the awesome storm-defying weapon that could otherwise have been mine. (insert noise of someone vocalising a grump). Maybe I can paint my own version on a plain black brolly and make a tentacle handle from papermache? But. I only have watercolour paints, and the handle would melt in the rain. Damn you, poorly thought out pseudo-optimism!

“Her tentacles of endless want
Reach through my corridors
And tempt me to taste of her power
I sober with the witching hour”~tori amos, almost rosey

Apologies for the unacceptable melancholia that infused the last post. I put that sadness in the bin and put on some music instead.

You know how sometimes you get obsessed with a song and simply HAVE to listen to it hundreds of times until you have memorised every single second? well. That is currently in progress.

This song is to blame:

so of course I posted in on facebook to share the joy – everyone loves a song about a failed relationship right?

This obsession has extended into a second day but has been accompanied by the following song, also by the Gaslight Anthem (though I have to block out the first 30 seconds or so cos that but is a bit sucky.)

partly cos I love the line

Every other song by this band pales in comparison to these two and I simply don’t know how someone would even start to put together compositions that are so balanced, catchy, interesting, and downright addictive. I think its got something to do with the really tight harmonies and on-point guitars.

“Have you seen my hands, just look at ‘em shake.
And the song just keeps on repeating, drop the needle again”~gaslight anthem, 45 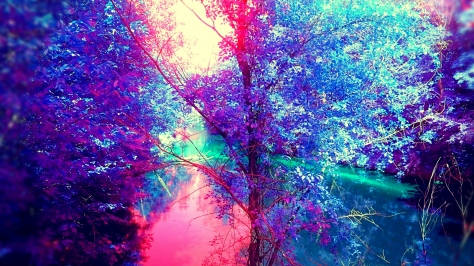 I have, at times been my biggest disappointment,
Expecting the superhuman, inside and out,
But finding the dregs of a lacklustre animal,
Rolling their eyes and then rolling on over.

I guess I rolled over for you too.

The fires were bright for some time,
Burning out the rot,
And the stars inside and out,
Almost aligned,
So that I was almost content with who I’d grown to be.

And there was always you, holding my hand.

I don’t know when the cleansing fires burned out,
And the mildew enveloped me once more.
An organic tide change when it all started
To come apart.

But you thought I chose it.

That content so sought was buried,
The assurance drowned in the night,
And nothing but fevers and dust,
Could live up to expectations.

Not yours, and not mine.

Am I your biggest disappointment,
Your one big regret?
Am I nothing but a constant reminder,
That you are tethered to something so frayed?

And unless your words are sent to crush me,
And keep me in the shadows,
Then why don’t you accept my failures?
Please help me mould them into something new.

And If you won’t,
Or if you can’t , then who am I
To trap you
In this perpetual monumental disappointment?

I know I will never be enough

What do they got?
A lot of sand?
We got a hot crustacean band!

Ah – Sebastian the crab, how I loved to sing along to those little mermaid songs in my childhood. Don’t know what  I’m talking about?
under the sea
Now you do!

I’m still pretty chuffed about going to the Boston aquarium again…can you tell?

Now. I expect you’ll be wondering what a cockchafer is…or…you’ll be imagining something that chafes one’s manhood, and I am here to tell you that it’s the name of a nocturnal scarab beetle, common in East anglia, and not a crude Nickname that I’ve aquired! The name probably means common gnawing beetle, according to Google anyway. I found one of these guys in the bathroom laying on its back having an afternoon nap…nudged to make sure it was alive, then gently ejected it out of the window…he might have a sore head when he wakes up tonight and wonder exactly  how much toilet water he drank to mean he didn’t remember leaving his hotel room.

He was no problem though, a dopey, sleepy harmless beetle.

Not like the killer arachnid that I found earlier on. That guy was definately deadly. I mean, it was clearly the ussain bolt of the spider world and macho with it…I’m still getting chills when I think about it…it was 28 degrees and I had goosebumps. I thought I’d go with the classic pint glass, card and out the window trick, and just about managed to slip the card underneath his legs without passing out but I’m not kidding when I say I think that bastard was on steroids. I’ve not seen a spider that big be so quick before and it freaked me the hell out….I spent nearly an hour going over, moving the glass a bit and seeing if my eight-legged prisoner had calmed down yet but he was still pumped. At one point I worried that he was actually biting his way through the cardboard…but I think he was having a drink from some of the residual water from the glass ( do spiders drink? I guess so or they’d dehydrate, right?)  Around this time I realised the following:

1. I could not pick it up without it going Bat-shit crazy
2. I couldn’t kill it without at some point either picking it up or allowing a gap to allow his escape
3. I didn’t want to kill it, it had trapped a greenfly for me

4. My boyfriend wouldn’t go anywhere near it when he got home so waiting wouldn’t solve anything.
5. Or worse, he might kill it in a horrific way, he previously killed one by drowning in boiling water then mashing it up on the bottom of the sink, leaving me the carcass to deal with 😦 I don’t like arachnids but I won’t kill them unless I can see no other way.

I finally plucked up the courage to pick the glass+cardboard prison up, walked the endless few metres to the window and threw the bugger out, snapping the window shut behind him and waiting for my heartrate to calm the hell down. I’m going to guess that when it finally came to transit time, spidey knew his bravado wouldn’t get him anywhere and that the epic battle for the black fleece blanket had been lost. He stood still and practically sulked. And to add insult to injury I put the blanket immediately in the washing machine.

Everybody loves a good heatwave don’t they?

Now onto the arts and crafts section of this entry!
I went to new Hampshire and I learnt to quilt.
Exhibit A 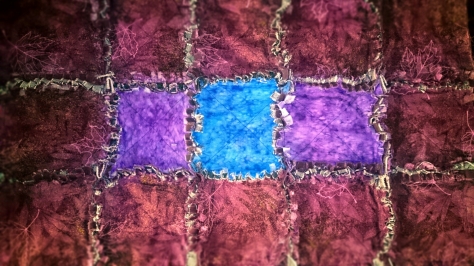 Beautiful eh? Hang on, I’ll show you the back too

It’s Meant to have frayed edges around each square. Apparently you are supposed to pick random bits of fabric but I preferred to do something more planned (or boring).

Don’t ask me what it IS that I made, only that it’s 50% denim, but I will say that if you were after something with which to chafe your nether regions, then I guess it would do the job.