Have you read “heart of darkness”? If so, please tell me if it stops being about boats. I really cannot tolerate novels about boats. It was a miracle I made it to the end of “the scar” by China mieville and the “boat” in that was kind of like a raft of hundreds of boats melded into a floating city. Sounds interesting? Nope. Boats, too late, like physics, netball and war stories (Gabriel garcia marquez aside) end in Zzzzzzz. Damn, maybe that would sort out my sleep problems…Hmmm..

If you, like me, are plagued by the detestable unnatural state of growing monumental carbuncles ( ok actually small pimples) on your face, you’ll know how great it is when you find a way to get rid of the bastards. I haven’t touched that tube of panoxyl for months, so in desperation I cracked it open. Three days later and my skin’s pretty clear and nongreasy and then, and only then, do I remember all too late, what happens when you peroxide your face. If you don’t already know, what happens is that your face turns into a human snowglobe, or an early stage zombie and no makeup can rescue you. Oh no! It just makes it look like you’ve got some hideous contagious disease. Mmm tasty.

Soooo that’s pretty much it. I shed facial dandruff for your entertainment and my own stupidit and I try to read about boats because it seemed like a good idea but actually just sends me to sleep (for a while).

I’m still dreaming of her. I still have a splitsecond lapse some mornings before I remember she’s gone. This constant nagging feeling that I’ve absent-mindedly forgotten to call someone, but then realising that I can only talk to her grave now. I miss her so much, but the grief has lifted and morphed into something more pensive and palpable. I smelt something yesterday that reminded me of her and I wonder how long I will remember her scent. I wonder how long I will remember how it felt to be truly and reciprocally unconditionally loved and accepted. I wonder if I will ever be able to step out of the shadow of fear, that I too, will suffer from her fatal malady.

“Ignorant siblings in the congregation.
Gather around spewing sympathy,
Spare me…

None of them can even hold a candle up to you.
Blinded by choice, these hypocrites won’t see.

But enough about the collective Judas.
Who could deny you were the one who illuminated?
Your little piece of the divine.” 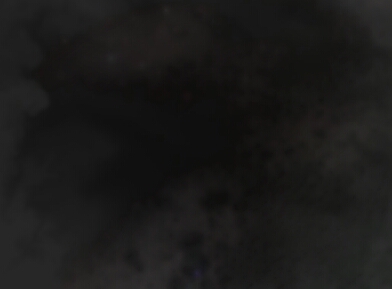 That one hopeful candle that was burning? They snuffed it out. The air was full of static then, alive with the unmistakable buzz of anticipation. Hairs trembling and skin itching as waves of adrenal mismanagement poured forth into the collective subconscious. In the grainy treacle of humid darkness, the visions started to take form. Each mind tasting the silent and unfamiliar aroma of another’s involuntary mental image.The rash of fear spreading rapidly, leaping from soul to soul indiscriminately. It would only be a matter of time before the insidious flower of panic came to bloom, and then, of course, all hell would break loose; candle or no candle.

“And you stand in the shadows
The room, dark and narrow
I bloom down to the marrow
It’s a beautiful storm
It comes with no warning” ~heather nova, beautiful storm

Cyclists in this city can be total arse-wipes.

A cyclist jumps a red light.
Does anyone care? Probably not, the drivers may tut.

A cyclist jumps a red light while a lady is crossing the road.
The lady grumbles to herself.

Six cyclists jump a red red light while a lady is crossing the road.
The lady gets caught up in a mass of bikes, she has to stop to avoid being hit from either side and is pretty annoyed.

Six cyclists jump a red light while a lady and her five year-old son are crossing the road.
The lady and child have to stop midway across the road, the child is scared and both are stressed and the lady shouts something like “Hey, watch out!”

Six cyclists jump a red light while a lady and her 5 year old son with downsyndrome cross the road (the boy is skipping happily holding his mum’s hand)
The lady has a meltdown in the middle of the road after her son is nearly hit by a bike, she yells out “what the hell is going on here? Can’t you see the lights?! It’s fucking DANGEROUS!  For fuck’s sake!

I had noted the skipping of the lad and smiled to myself as I waited at the red light (I remember skipping along before I got too old for it to be cute) and some moments later focused on the scene on the other side of the road. I raised an eyebrow but I applaud this lady for standing up for herself and child even though the swearing could in theory have been avoided, she must have a hard enough task in hand even before turds on pushbikes go trying to knock the pair of them down like bowling balls. It has become all too common for cyclists to think that it’s OK to jump lights, or manoeuvre without signalling or even checking their surroundings, that it’s perfectly dandy to forgo lights at night time and weave all over the road, so incredibly engrossed are they in themselves and their personal goal that they think the rules don’t apply and that they are special. Well yes, if that was you trying to knock down a kid with downsyndrome just to gain yourself 30 seconds on your journey, you are a particularly special brand of self-centred, wank-stained prick who aught to have a kick in their privates if they break the basic rules of the road again, and have their bike impounded, or at least defaced appropriately at the soonest convenience.

“Nobody else is slipping the blade in the marmalade”

Everything seemed a bit brighter yesterday, with the dubious exception of the sky. Even a visit to the phlebotomist didn’t freak me out. And not for the first time it occurred to me.
I’m turning into that person who comes out with pointless stories to a bored nurse, who makes highly awkward jokey comments to strangers in lifts, and who is starting to have a very boring set of stories that seem to want to be told to total strangers serving at the shop counter. Didn’t they want to hear about the time I nearly passed out donating 50ml of blood? Don’t they want to know about when the lift broke down? The young girl in the pharmacy didn’t seem to want to know about my highly sexy postnasal drip…

In short, I am turning into my Dad.

I’ve spent years cringing as he goes on about repetitive stories that he obviously find terribly funny and witty, if not informative, and I’ve often sat there wondering why his subconscious doesn’t tell him, after one telling, to shut up. Now I see that one’s subconscious saying “come on,  this is fucking boring, they don’t care, stop talking” doesn’t actually have power over the momentum. Its too late, the floodgates are open and out spews some poorly executed anecdote, or sarcasm (I’m not nearly as skilled as father dearest with stories). As I get older, the control is getting  less, I’m caring less that the person I’m talking to is looking the other way, searching for the panic button….

Its only a matter of time before I start telling you all the same thing over and over as if it’s the best thing I’ve ever said. Oh wait…that’s pretty much my blog right? Bugger!

Well I’m on to you genetic and environmental predisposition to oversharing in awkward and unnecessary situations…and the only way I can think to tackle the issue is to come off prozac and wake up that layer of semiconsciousness that reasons verbally with myself. I skipped a couple of doses and found myself having a pretty good train of thought on my cycle ride to work, but the meds damp that shit down, I normally have just intangible subconscious and then whatever comes out of my mouth, nothing inbetween. I kind of miss having conversations in my head with myself..it certainly prevented and unwanted verbal leakages! But at what cost? Sometimes those internal discussions go awry….

“No, I know what you said
But that doesn’t mean that I understand
And you don’t know what I meant by that“

I’m feeling kind of sad and hopeless today, so instead of whinging I’ll tell you about the four-leggeds in my life. The yard cats were full of themselves this weekend. Basking in the winter sun, and making ridiculous frolicking poses. Here’s Heidi doing a little impromptu interpretive dance. 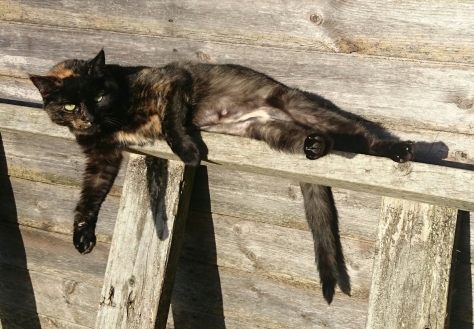 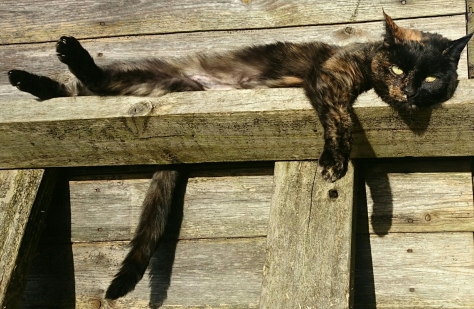 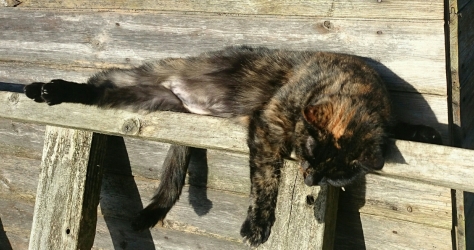 Buster was a little bit bolshy (horses eh?) and kept shuffling around while I groomed him, desperate to get his head inside the stable incase by some miracle, he had grown a go-go-gadget neck and could now reach his haynet (no mate, you still can’t reach it). For a horse who regularly gives himself a facial mudpack, this particular manoeuvre was less than helpful, and he smugly marched off for a grass snack while I was putting his bridle on. I got comically dragged along holding reins and jumping to avoid the trailing leadrope yelling ‘STAND!’ and just  hoping he didn’t a) trash his bridle by stepping on the reins or b) tread on the leadrope and trip himself up and c) tread on my feet while I tried to avoid a and b happening. I was rescued by my friend who laughed at me then held the beast still while I completed the bridling process. Oh the shame! I had a perfect photo opportunity with buster too but just as I got my phone out he stepped dangerously close to my abandoned hat…he so cute with his shaggy unclipped winter coat! maybe next time eh?