Ah back to work tomorrow!
Back to that sodding manuscript!
This week I WILL make some progress!
Time to coax my cells to work for me…somehow (mine as on belong to me, not of my body). I’m looking forward to a week where nothing catastrophic happens…or at the very least I don’t have to report any incidents to the accident book….we are almost out of plasters thanks to my legendary clumsy streak.

This weekend I met many fish and several frogs. Here is exhibit a

Frog
And exhibit b

Same frog, different angle (nice reflections imo)
This guy and his seven friends were hanging out at my gran’s pond. Sunbathing and getting jiggy (frogspawn already being deposited). They were a pretty vocal bunch, and responded to frog imitations from nearby humans. Hehe.
Mumma-moose said the story was that if you kissed one it might turn into a prince….however…we were neither of us game enough to try!!

I got to see the folks in Slovenia on Skype, complete with a serenade of twinkle twinkle 🙂

I often forget that I have Skype, or phone numbers. There are a couple of people that I am a year or more overdue to call…what am I waiting for???

I was privileged to overhear a conversation between SO and Mumma-moose about how I am allegedly obsessive about the horses….and that I’m super selfish due to anorexia…I stopped trying to listen then. I guess they were whispering for a reason; I’d go mental if they said either to me. Me? Obsessive? I’m not the one who hoards 20 boxes of facial tissues in my bedroom :S

Although I’ve spent today doing a big fat nothing, I’m not quite rested (been super sleepy yet restless and gripey) and very keen to plan an away trip in the near future. Now I just need to find someone to accompany me on a weekend adventure to somewhere as SO is work restricted for some time. Any offers or ideas??

Here I am with Buster, chillin after an epic trotting episode. No stirrups, barely any rein contact. Now I rather assumed that I looked um, Not like a bin bag on horseback. My friend can’t see anything wrong with how I look….bless her, o guess she is desensitised against the unacceptable ugliness of that jacket. This is only the second photo of myself on horseback that j can remember ever seeing. I seriously think a change of hat silk is in order…to a darker velvet one like my old one! Does everyone forget what they look like? Does anyone else get disappointed and embarassed?

Just thought I’d post this pic to remind me that even though I’m missing the horses this week, next week will be great (thought not necessarily elegant).

This house.
It smells.
Of septic waste.

I shit you not.
Pun intendended.

Do I want a £1 dvd on how to.paint horses in watercolour? Um. Do I need that? I thought watercolours of horses was one of the few things i did adequately…

I do not belong here. I know that my withdrawn demeanour will not be considered anything to do with sadness or depression, but just being a moody bitch. Knowing that doesn’t make me smile any more.

The fact that I am vegetarian seems to be a perfect excuse to make sure that I don’t eat with the rest of them. The only conversations concerning me and my ‘stuff’ have been how my gran is doing, and how close that crashed helicopter was to my mums house.

Ah. Yeah. I am instructed to stop looking moody. Asked what I want to do…I cannot think of any answer other than ‘be somewhere else, anywhere..’ so i said I didn’t know…

As with the last visit I’m told not to flush tampons or sanitary towels down the toilet else I’ll have to go and fish it out of the drain.

I honestly wonder what on earth kind of cretin they actually take me for.

I so want some alone time, or to be able to wash, or even to be able to read something without being made to read the news instead because it will be good for me…

Can’t go and read alone or will be branded antisocial. Sat listening to football commentary. I’ve spent so much of the past 24 hours yawning..I just want to sleep so that leaving seemingly comes sooner. 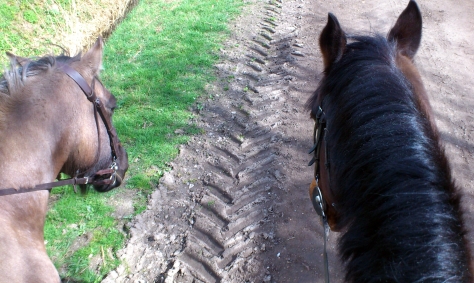 A couple of snaps from Saturdays ride

A cute package of silver earrings arrived from hongkong courtesy of etsy.

Would I buy from etsy again? Sure! I was skeptical but it all worked out just fine:-).

I am still fighting the urge to email the seller and correct the English note that came with the parcel….correction wouldn’t change the meaning, and in a way it’s kind of cute when you have to rearrange a sentence to understand what is being said.
What right do I have to make corrections anyway?? As an English adult who went through the normal educational system (and had two teachers (music and technology) as parents) I have somehow, like most of my peers (except those who did a-level or above eng language) come out of the system knowing almost no rules, and relying on the words ‘sounding right’. Fine you say, if the rules are ingrained and you don’t need to think about them…but…I know several people for whom English is their second, third or fourth language. Most of these people know the meaning of things like subjunctive, present participle, pronouns and who knows what else! It makes me feel quite stupid when I’m arguing til the cows come home that the rule cannot be x because that makes the sentence ‘sound’ stupid!

And this from someone who likes to think they have a pretty decent grasp of their own language, and how best to communicate using it! 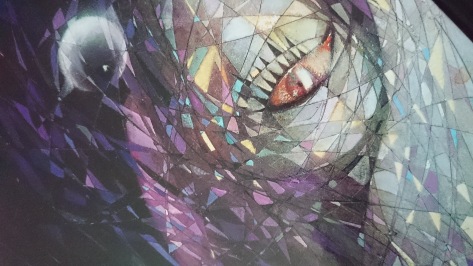 After fighting for a few hours with the British Library box office website, I finally managed to get some tickets to see Neil Gaiman and Tori Amos talking about their comic book connections (y'know….sandman comics, comic book tattoo, Tori's references to Neil in her songs etc) Of course immediately after Neil's facebook page announced the talk the box office crashed…and many people spent hours just hoping the site would favour them…I gave up around midnight, and tried again this morning at 7:30, but it said it was sold out and wouldn't allow me to put tickets in cart.

Not one to be dissuaded by things like that, I doggedly kept on trying…y'know, just in case…and to my delight, someone clearly failed to check out their basket in time, and their tickets were quickly scooped up into mine. I'd already set up an account last night so I flew through the payment and now am the proud owner of two tickets 🙂 what's even better is that I think it will be held in the auditorium which only seats about 250 people. Can you imagine being so close to both Neil and Tori? and then in the evening seeing the bizarre personality of Amanda Palmer as a cameo? amazing. And surrounded by books the whole time. Ah bliss, and with an old school friend (with whom I have been comparing nerdy notes about the sandman comics etc)

I clicked something wrong on Internet banking.
Oh
The
Shame.
And just like that my £25 compensation and paid for phonecall disintegrate into the ether.
I just have their word for it of course….but…this ‘event’ happened four months ago and we all know that my strung-out guppy brain can’t remember that far back. Why didn’t I notice sooner? Well I did, but then SO pointed out that you don’t pay council tax for two months of the year…so i figured it was all under control…
Curses.
*********

Yesterday an unwashed plate (probably mine) on the living room floor caused SO to claim suicidality.

I spent the whole day cleaning.

I just went and drove SO’s car for the first time. It felt a bit weird to be honest and SO was gripping on to the seat grimacing the while way around snapping ‘GEAR! GEAR!’ and ‘SLOW DOWN’ at me

We got back in one piece, and I stayed calm, didn’t do anything dangerous and I forced SO to come up with some positives about the experience to counter his criticism of the speed-bump and gear-changing mishaps. Apparently junctions were ok, and I managed to stay calm, I also tackled a mini roundabout in a reasonable manner. Ha! I’ll have to take that and run!

This year is shaping up to contain some great things. Horses every week, Neil, Tori, then Neil again.